Citizens identification at the regional level: which kind of European lives in your region? 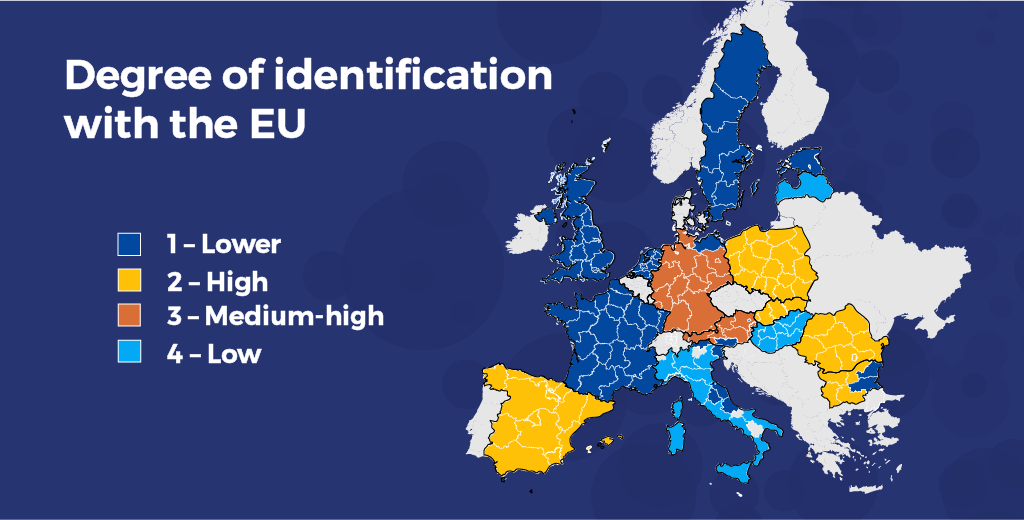 How does European identity change at the regional level? Who feels more European and who doesn't? What are the variables that mostly affect the identification with the European Project? Our results are consistent with the latest trends in the EU. Read more and download the report on the citizens and regions identification curated by the University of Bologna.

To understand what motivates citizens toward feeling more or less European, the University of Bologna developed a novel probabilistic model, which allows us to classify citizens and regions according to their different patterns of identification with Europe and the European project. This is the aim of Deliverable 2.4 and it builds on previous PERCEIVE research's results within Work Package 1 and Work Package 2.

The analysis identified six heterogeneous clusters of citizens regarding national vs. EU identification, the evaluation of the EU membership and its effectiveness, the level of citizens’ awareness of the existence of the Cohesion Policy and the agreement with its solidarity value, the trust in EU institutions and the perceived level of corruption.

Three clusters comprehend citizens that strongly identify with Europe and positively evaluate the EU membership, whereas three shows a less strong identification and are more likely evaluate the membership as a negative thing. The names of the clusters go from "Confident Europeans" to "Wary Cons-Europeans".

The results help to shed light on the patterns of EU individual and regional identification with the European project, as well as their drivers, and they are consistent with the latest tendencies emerged in the EU: the growing Euro-Skepticism that boomed with the Brexit referendum in the UK, remarked by the results of the recent elections in France, Hungary and Italy.

In fact, all the UK regions and the North Ireland, all the French regions, the Netherlands, Sweden and Estonia are characterized by a lower level of identification and are the most critics against EU institutions. The regions from the countries of Eastern Europe, except Hungary, show the highest level of identification with Europe and trust the EU as regards effectiveness and corruption.

Thus, on one hand, it emerges that the most hostile regions to the European project are somehow the richest ones. On the other hand, there is a high level of trust in EU institutions in Central and Eastern European countries, which instead perceive a high internal level of corruption.

To what extent do economic and social variables matter in this scenario? Regions with similar dimensions may have different patterns of identification and perception of Cohesion Policy. What else can contribute to this diversity? Might it be the communication of Cohesion Policy by the media? This relationship is further investigated within the Deliverable 3.4.

Do you want to read more? Download the Report here.

Do you want to read the full research paper? Go to Work Package 2.